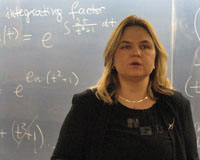 Milena Stanislavova is a Professor of Mathematics at the University of Kansas. She was Director of Graduate Studies in the Mathematics Department from 2012-2017. She is currently Chair of the Economics Department at KU. Professor Stanislavova received her M.S. in Mathematics from Sofia University in Bulgaria in 1993 and her PhD from the University of Missouri in 2000. She was a Visiting Assistant Professor at the University of Massachusetts before joining KU as Assistant Professor in 2002. Her major fields of study are Dynamical Systems and Partial Differential Equations. More specifically, she is investigating the stability and long time behavior of special solutions of nonlinear equations of mathematical physics. Stanislavova's research deals with a variety of problems concerning solutions of a large class of PDE's, which can be viewed as dynamical systems on an infinite-dimensional space. Hamiltonian PDE's support coherent structures like solitary or periodic traveling waves, as well as wave trains and multi-pulses. These are very important objects when modeling physical processes and their stability is essential in practical applications.

Stanislavova teaches undergraduate courses in differential equations, calculus of variables and complex analysis and graduate courses in analysis, dynamical systems and PDEs. She is currently a faculty fellow in the Honors Program at KU and teaches a freshman seminar for the honors students. She is the recipient of Don and Pat Morrison Award for Excellence in Teaching Mathematics.